By Caroline Curtis at 1 Mar 2018, 10:40 AM on Pork production with entire males by Lauren Turner 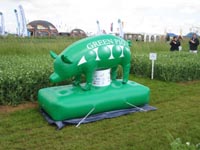 A new inflatable Green Pig has made its debut at the Cereals event this week, helping to tell farmers about the Green Pig project. The pig will be appearing at various events this summer.
The project, sponsored by Defra’s LINK programme, set out to establish the practical limits for inclusion of peas and beans in pig diets, that would not impact negatively on their growth.
Home-grown peas and beans can help UK pig farmers reduce dependency on soya as the main protein source in pig feed.
Soya bean meal is popular for inclusion in livestock feeds on account of its competitive cost and high protein density. But there is concern that increasing world demand for soya bean meal as a protein source will outstrip supply and that this increasing demand is driving soya production to move out of established cultivated land into new areas, resulting in deforestation and land use change in some countries.
For UK pig farmers there are two key potential benefits of replacing some of their imported soya with pulses. Firstly, it can help reduce the environmental impact of pork production and, secondly, that it could help pig farmers and the supply chain manage their costs, sourcing their protein locally and giving some protection from volatility in world soya prices.
Click here http://www.bpex.org.uk/articles/301804/30_Sustainable_Farming.aspx to download Farm Case Study no. 30, including details of the commercial farm trial results.
And, if you can think of a name for the Green Pig, let us know. ‘Pea-ter’ has been suggested..!